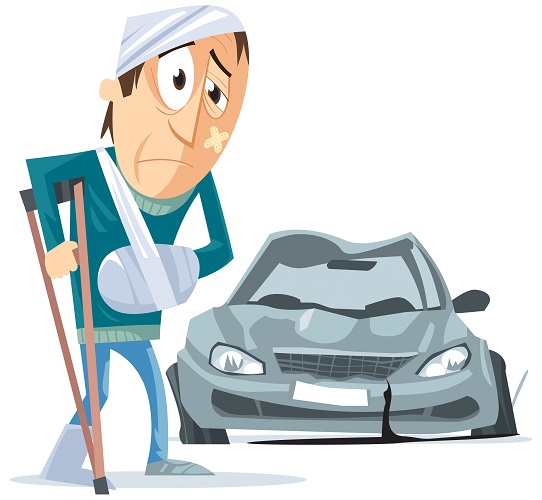 I wish that guy had insurance!

This article focuses only on Uninsured Motorist coverage and based on NY coverage. Readers not located in NY can apply the basics to their own policies. Check your state requirements to be sure.

New York amends the auto policy to fit a NY law that applies to uninsured drivers. NY auto policies take out standard policy language and replace it with the law. Other states may just use the policy language in lieu of a law.

Damages for Bodily Injury Caused by an Uninsured Motorist

Uninsured Motorist coverage is mandatory in the State of New York. Registering a vehicle for road use requires that a driver carry minimum limits of liability. Basic coverage for Uninsured Motorist includes both bodily injury and death. Bodily injury coverage must be a minimum of $25,000 per person and $50,000 per accident. Any death resulting from an auto accident mandates no less than $50,000 per person and $100,000 per accident for coverage. Collecting damages for bodily injury or death, sustained in an auto accident, requires that the insured has a legal right to do so.

Property damage does not fall under the NY Uninsured Motorist coverage. Some states do allow this extension. Payment for non economic damages (pain, suffering, loss of services) requires the insured to suffer a severe injury as defined by the law, Section 5102(d) of NY Insurance Law. The excerpt below comes from the New York State Dept of Financial Services website, www.dfs.ny.gov .

(d) “Serious injury” means a personal injury which results in death; dismemberment; significant disfigurement; a fracture; loss of a fetus; permanent loss of use of a body organ, member, function or system; permanent consequential limitation of use of a body organ or member; significant limitation of use of a body function or system; or a medically determined injury or impairment of a non-permanent nature which prevents the injured person from performing substantially all of the material acts which constitute such person’s usual and customary daily activities for not less than ninety days during the one hundred eighty days immediately following the occurrence of the injury or impairment.

Accidents within New York State are covered by the policy. The law determines the status of an uninsured vehicle. Coverage is afforded unless an exclusion exists.

The ownership, maintenance, or use of the following types of vehicles determine if a vehicle fits the Uninsured definition:

An insured injured in an owned  will file the claim with bthat insurer. If the insured has multiple policies then damages may be paid on a proportional basis.

Non duplication provisions apply to this coverage.  Benefits from other sources such as workers compensation, NYS Disability, No Fault (PIP), other motor vehicle and non motor vehicle insurance reduce the amount payable under the policy.

Insurance is a legal contract. Good advice is not expensive. Shop Prepared!